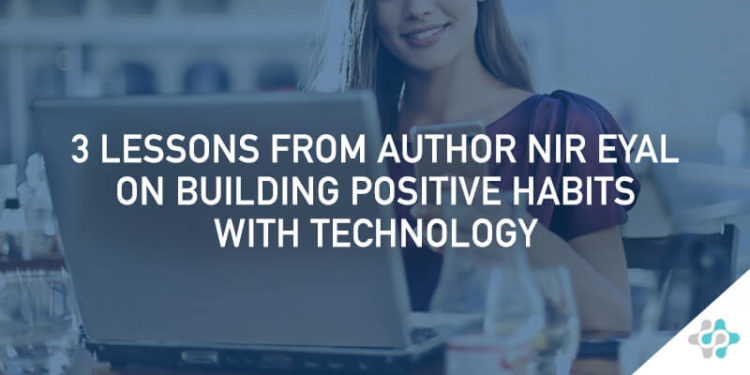 3 Lessons from Nir Eyal on Building Positive Habits with Technology

For the past two decades, tech companies in Silicon Valley and beyond have competed for their share of a budding market.

More valuable than cold cash, gold, or stocks in the latest hot startup, this market doesn’t deal in any kind of traditional currency.

With the advent of the Internet and handheld devices that allowed us to surf online at all times of day, a user’s attention– what app they’re using, how long they’re staying on that app– has acquired significant economic worth for anyone able and willing to build an app, service, or simply a website.

And so the war for attention began.

Maybe that’s a bit over the top, but tech companies most certainly have a lot of muscle in the way of millions, even billions, of investor dollars being put towards figuring out how to capitalize on and hook more of people’s attention for the profitability of their venture.

Is it really all that bad?

But wait– is that all this is? Are tech companies just trying to profit from us and we’re being used by pawns for economic gain?

There are definitely some questionable practices going on. Some have criticized social networks for what could be seen as manipulative design practices. However, that’s only part of the story.

Within this booming tech revolution are many bright spots as well, things that have made many of our lives better. Much of which many of us couldn’t imagine living without.

Plus, as we’re about to find out from tech psychology and design expert Nir Eyal, techniques used for the purpose of drawing consumer’s attention are as old as Fruit Loops (Okay, maybe a little older than that), and no one’s ever seemed to mind them. That or the bright red stop sign on your street corner.

Recently on TFM podcast episode #35, Nir Eyal is a writer, consultant, speaker, and expert on the intersection between technology, psychology, and business.

He’s been dubbed “The Prophet of Habit-Forming Technology” by M.I.T. Technology Review, and for good reason.

Between his books, Hooked: How to Build Habit-Forming Products and Indistractable: How to Control Your Attention and Choose Your Life he teaches on:

Here are 3 lessons from Nir Eyal on building positive habits with technology:

1. Technology isn’t bad or evil, but we need to learn how to live with it in a healthier way

Eyal makes it clear in Hooked: How to Build Habit-Forming Products that there are two types of psychological manipulation:

Persuasion involves a kind of convincing nudge. Take a Coke commercial, for example.

They always make that bottle of Coke look like the most incredibly delicious thing ever. You practically want to jump out of the house and go straight to the store to pick up a bottle.

Coke is something you like. You’ve tasted it before and you enjoy drinking it. Coke knows this and they gear their advertisements in a way that entice you based on this knowledge.

That’s persuasion, and it’s far more common than you think.

Even the stop sign on your local street works the same way. It’s designed in a way to catch your eye when you’re driving by (the bright red color, reflective surface), influencing you to stop.

Smartphone apps and other newer technologies are designed in a similar way. Colors, intuitive design, sounds (see: Pavlov’s dog), and other persuasion techniques are used to hook users and keep them coming back to the app, be it a social network, mobile game, or other.

But coercion is different (and unethical)

Coercion is when someone, or something, get you to do something you don’t want to do.

Think about the pushy salesperson that’s so relentless you eventually give in and buy whatever they’re selling just to get them off your back. Afterward, you can’t shake that uncomfortable feeling– like you were just used.

Some argue that the persuasion techniques smartphone apps and other new technologies are utilizing ride dangerously close to coercion.

However, we all get value, be it connection, entertainment, or functionality, from the apps we use. And we use them because we enjoy the value we get from them. And, well, software companies use them because they work.

Ultimately, it’s unrealistic to think that we can just dump technology. Our smartphones and things like social media have become tightly bound to how we operate and communicate in daily life.

You could argue that tech companies need to be a bit more compassionate with their design practices. However, your best bet of making a difference in the quality of your life as it pertains to your tech use is to look at your own habits.

The first suggestion many will make is a tech detox. However, a tech detox doesn’t work, says Eyal, as we just end up coming back and gorging before moving right back into our old habits with technology.

Therefore, we need to learn how to use technology in a healthier way. We need to look at our tech habits.

Start paying attention to when you use what device, what you use it for, and how often you use said app or scroll through said website.

Get clarity about what your tech vices are– those things you just can’t seem to live without– and work on curbing your use.

Fortunately, you don’t have to do it all on your own. Companies such as Facebook have started moving away from measuring success based on time on app. Instead, they’re now beginning to measure user well-being (how they feel after using the app).

2. Understand the internal and external triggers that cause distraction

It’s clear that we can, and should, use technology in a healthier way. The way that newer technology is designed, though, makes that difficult.

However, while these should be dealt with, Eyal argues that it’s not these external triggers but the internal ones that are the real problem.

According to Eyal, there are two types of triggers:

External triggers, Eyal says, aren’t inherently bad for us. Rather, it’s how we respond to them that matters.

“If you plan to pick up that phone call and that’s what you scheduled and then that external trigger moves you towards traction… it helped you,” says Eyal. “But if that phone call interrupted the focused work you were doing and now you’re doing something you didn’t plan to do now, it’s moved you towards distraction.”

The first step, he says, is to analyze these various external triggers– the pings and rings– to understand how they’re affecting you.

“Two-thirds of people who own a smartphone never adjust their notification settings,” says Eyal. Simple actions like this can help us take positive action towards controlling these external triggers and living a more intentional lifestyle.

Getting to the root of the problem with internal triggers

“Internal triggers are these prompts to action that come from inside our own heads,” says Eyal. These, Eyal says, are the real issue and often the cause of our susceptibility to external triggers.

“Distraction starts from within”

“The icky-sticky truth that we don’t like to acknowledge… is that so much of what we do is driven by these uncomfortable emotional states,” he continues.

Distractions are a way for us to numb uncomfortable feelings, and we’re skilled at avoiding them at all costs.

“You can’t call something a distraction unless you know what it distracted you from.”

The problem is, “If we don’t tackle these internal triggers and find ways to cope in a healthier manner,” Eyal says, “we will always be distracted.”

3. Focus on traction vs. distraction

Discovering what your internal and external triggers are is a big part of the puzzle, but what else can you do to build more positive habits with technology?

To be more mindful with your tech use, Eyal suggests focusing on traction vs. distraction.

Traction is intentional, it’s when you’re doing the things you planned to do. In other words, you’re moving forward (hence traction).

Distraction is self-explanatory– it’s when your pulled away from intentional action (hence distraction).

How to move from distraction to traction

The goal, Eyal says, is to figure out how you can make distraction less likely and traction more.

For example, one of the simplest things you can do to live a more mindful life and take control of your technology use is to plan your day. Surprisingly, “only about 1/3 of people actually plan their day,” says Eyal.

Ultimately, if you don’t put down on our calendar what you plan to do, you can hardly say you were distracted. You need an intentional plan for traction before anything.

In addition to planning your day, Eyal suggests you make a pact with yourself to remove distractions.

To that end, there are a ton of apps already on the market that can help you live a more intentional life, like work focus app Forest and Time Guard (Apple), both of which Eyal personally uses and recommends.

“This is why I really bristle when people say that technology is addictive and that it’s irresistible or hijacking our brain,” says Eyal. “This gives us the impression that we’re all somehow addicted, that we’re all powerless.”

However, this couldn’t be further from the truth, Eyal says. There are countless tools and techniques out there that you can use to take control and live more intentionally.

Nir Eyal writes, consults, and teaches about the intersection of psychology, technology, and business. He is the author of the bestselling book, Hooked: How to Build Habit-Forming Products and his new book, Indistractable: How to Control Your Attention and Choose Your Life, teaches you how to manage distractions, build more positive habits with technology, and live more intentionally.

In addition to blogging at NirAndFar.com, Nir’s writing has been featured in The Harvard Business Review, TechCrunch, and Psychology Today.

Find out more about Nir at Nirandfar.com and watch TFM podcast episode #35 with Nir Eyal here. 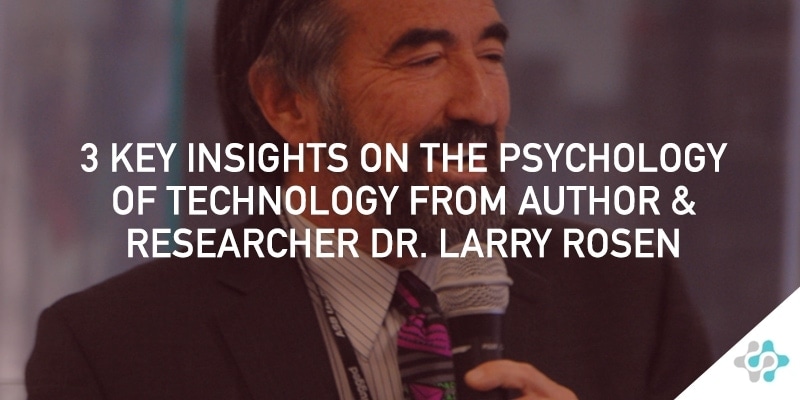 3 Key Insights on the Psychology of Technology from Author & Researcher Dr. Larry Rosen

If you’ve ever been concerned about the psychological impact of our society’s increasing obsession with technology, Dr. Larry Rosen has studied it from every angle over the past 30 years.

You might be wondering what there was to study back in the late 1980s! Even then, as computers made their way into homes and workplaces, Rosen began to recognize and study signs of “technophobia.” In fact, his first publication TechnoStress: Coping with Technology @Work @Home @Play was published in 1997.

But with the exponential growth of personal technology like iPhones and social media, fear has been replaced with anxiety and distraction due to our constant connectedness. That’s been the focus of his research over the past decade.

Robert Plotkin had an opportunity to talk with Dr. Rosen on episode 23 of the Technology for Mindfulness podcast about what he’s learned from his years of research and how the fields of neuroscience and psychology can help us engage with technology in a healthy way. Here are three key insights we gleaned from their conversation on the psychology of technology.

END_OF_DOCUMENT_TOKEN_TO_BE_REPLACED 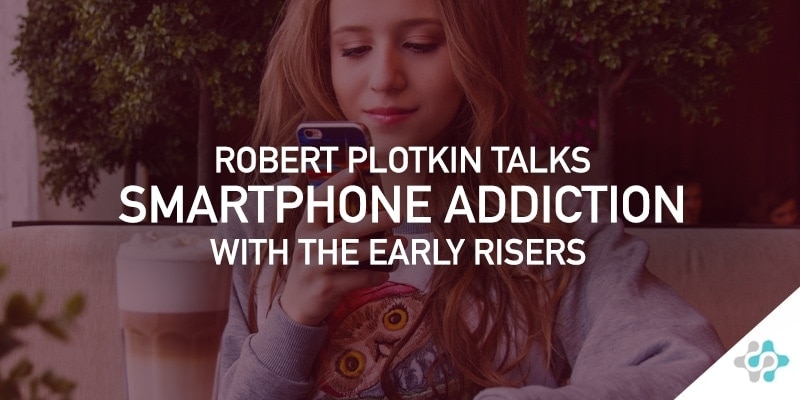 Listen as Robert talks with host Schuyler Diehm about using mindfulness to break smartphone addiction and establishing a healthier relationship with tech.

Listen to Robert on the Early Risers podcast (iTunes).