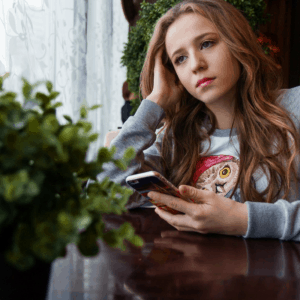 The increase in adolescent depression is undeniable.

In the last 6 years, between 2010 and 2016, the number of adolescents who have experienced major feelings of depression increased by 60% throughout the U.S. On top of that, suicides among people aged 10-19 have reached a 40-year high after a slight decline between the 90’s and 2000’s.

One of the major contributing factors are those devices that today’s teens are so addicted to: smartphones. But it’s not the devices themselves that are aiding the problem, it’s not just the act of staring at the screen. It’s what they’re doing.

We’ve all heard tragic stories of cyberbullying, but even if your child has managed to avoid the harsh fire of their relentless peers, there’s still more to worry about.

Social media is full of highlight reel photos, only the best moments, selfies taken at just the right angle with just the right lighting. These images can create unachievable expectations in the minds of impressionable young teensâ€”ideals that can make them feel inferior and bring about feelings of depression.

Along with cyberbullying and social media, there’s also the fact that smartphones have caused us to multitask more than ever before. While that may sound like a good thing, multitasking is actually harmful to usâ€”it wears us down and inhibits our ability to process emotions and make decisions.

While there may be many other factors contributing to the recent surge in teen depression, there’s no doubt that technology is playing a large role.

Read more about teen depression and their use of smartphones here.