I’ve talked before about how technology is taking over, about how many times 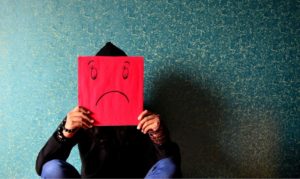 we’re accidentally sucked into our phones. We’re checking our social media accounts, multiple times a day for no other reason that the fear of missing out (FOMO).

Have you ever opened up Facebook, scrolled mindlessly only to discover there’s nothing interesting happening and set your phone back down? Probably. But then (and be honest here), how many times have you mindlessly picked your phone up just moments later and opened Facebook again?! Yeah, it happens. Does it make sense? No, but it happens.

It’s similar when we’re hungry and looking for food; we’ll open the refrigerator and decide that there’s nothing good in there and move on to the pantry. But then a few minutes, guess what?! We’re back to the refrigerator hoping something delicious has magically appeared in those few minutes it was closed. It doesn’t make sense, it’s not productive. But at least that’s not harmful to us the way checking Facebook multiple times a day apparently is.

The less you check Facebook, the happier you are.

According to a new study, people who access Facebook more often are not as happy as those who use the platform less frequently.

And surprisingly, it doesn’t matter if you’ve intentionally logged in to actually share something or to simply scroll through the posts and like the content. It’s the quantity of time spent on the platform that matters, not what you’re doing while on it.

The study found that linking content and clicking links on Facebook played a significant role in predicting future self-reported physical and mental health as well as overall satisfaction with life.

If you’re interested in reading more about this study you can find it here.

This is all the more reason to ask yourself these 5 questions before you pick up your smartphone again. To be happy and healthy, we need to mindfully limit our use of technology and use it as a helpful tool, not a mindless distraction. Set the phone down and have a real conversation or simply enjoy the beauty of nature outdoors.