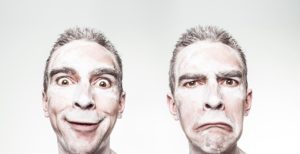 together. Whether you’re at a medical hospital, physical therapy, or visiting a psychiatrist, chances are that technology is going to play a role in your treatment.

One such technology is making a name for itself in the medical and psychological community as an innovative way to help treat patients with major depressive disorder (MDD). Those with MDD have an imbalance in their brain activity: the areas involved in emotion processing are in a hyperactive state, while the cognitive control and emotional regulation areas show decreased activity. Now, a new app is aiming to balance those two areas of the brain.

EFMT stands for Emotional Faces Memory Task, a technology originally developed by two researchers at the Icahn School of Medicine at Mount Sinai.

A new study found that this technology had the ability to significantly reduce symptoms of MDD.

During the EFMT study, the experimental group of patients was shown a series of faces and asked to identify the emotions shown on each face. They were then asked to identify the number of faces they had previously been shown that display the same emotion. By doing this, it helps to balance the activity in the two areas of the brain. The control group was asked to complete a similar task, but instead of using faces and emotions, they used shapes.

At the end of the study, those who received EFMT treatments experienced a 43% reduction in MDD symptoms versus only 16% in the control group. In fact, the initial results show that this form of therapy is nearly equally effective as treatment with drugsâ€”not to mention, much safer as well!

The developer of the treatment, Brian Iacoviello, Ph.D., has this to say about why it works:

…higher cognitive control regions will stay active even while the brain is processing salient emotional stimuli, giving the individual the capacity to shift their mindfulness and attention so that they are not perseverating.

This treatment is delivered via an app on the Click Neurobehavioral Intervention Platform, developed by Click Therapeutics.

Treating depression without drugs and without the stigma attached to visiting a therapist? I think that’s something we can all get behind!

Check out these other studies using mindfulness and technology as alternative medicine:

A New ADHD Treatment for Children

The Solution to Opioid Addiction