Updating Tasks in Light of Your Intentions 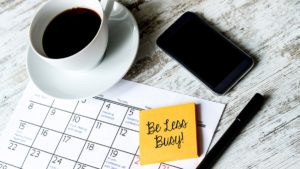 This exercise consists of revising your daily or weekly tasks in light of your long-term goals or intentions.

There’s probably some redundancy between this and some of our other tips, but the main point is when we get focused â€” just on creating and running through our to-do lists â€” it’s very easy to find ourselves racing from one task to the next and feeling like we are being very productive. But that productivity raises such questions as What are those things that are getting done? and Are they the right things for us in order to act in line with our intentions?”

Stephen Covey, a productivity guru and author of The 7 Habits of Highly Effective People, said (and I’m paraphrasing), When you’re climbing the ladder of success, make sure it’s the right ladder. You can get to the top with that ladder and feel like you’ve accomplished a lot, but if it’s the wrong ladder, what have you really accomplished? If you succeeded at the wrong thing for you, then what have you really succeeded at?

The same principle applies to tasks.

Completing the tasks on your to-do list and crossing them off is very satisfying. It gives us a hit of dopamine. But if we’re not mindful about it, we can end up getting addicted to updating the to-do list, doing the tasks, and then as our tasks, situations, goals, and intentions change, we might find ourselves mindlessly carrying out tasks on the list that aren’t really aligned with our intentions.

So here’s a simple way of putting this: It’s fine and great to make to-do lists and use them to help remember and organize things to do in an efficient manner. I’m not criticizing that. I’m just saying that you should periodically go back to the list and not just ask yourself, What have I gotten done? What have I not gotten done? or What’s left to do? but revisit what your intentions were. Maybe it was that big New Year’s goal. Maybe it’s other smaller intentions that you set for the week.

This helps you recalibrate your to-do list over time to make sure it doesn’t fall out of alignment with your intentions.

Earlier, I said one of the things you might find yourself doing is taking things off the list without completing them just because they’re no longer in line with your intentions. Ask yourself whether you have ever just taken an item off the list not because you completed it but because you decided that you no longer wanted or needed to do it since it didn’t align with your goals anymore.

Additionally, if you do take something off the list without completing it because it’s no longer in line with your intentions, take note of how you feel about that. As a task- and productivity-oriented person, I often experience some pangs of guilt â€” some feeling that arises and tells me, I should have done this thing even though applying mindfulness suggests that I no longer want or need to do it. At that point, you can examine the feeling and perhaps not have your actions driven or dictated by it.

So I think there are a lot of ways to apply mindfulness to your to-do list â€” not necessarily in order to make yourself more productive or efficient but just to make sure that the way you’re spending your time or performing your tasks is actually in line with what you’ve set as your intentions.