The Pros and Cons of Mindfulness Reminders 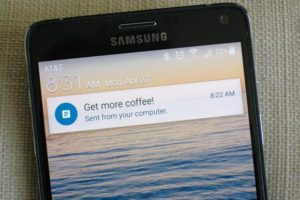 There are many apps that can remind you to meditate or be mindful. You can set them to remind you at a certain time and configure them in all kinds of ways:

I’m a big fan of these apps and suggest that you experiment with them to find which ones work best for you.

But there’s an interesting paradox here: A notification that reminds you to be more mindful can itself be distracting and actually detract from your mindfulness! The very apps that are reminding you to be mindful â€” if they remind you too much, in a wrong way, or at the wrong time â€” can actually end up creating the problems we’re trying to help alleviate with mindfulness.

I was at Wisdom 2.0 a couple of years ago in San Francisco and attended the breakout sessions on technology and mindfulness. Some of the people in the group were app developers and one of them talked about a category of app that he called Nag Apps â€” apps that nag you to be mindful. I really like that term because when an app is bothering you to be mindful, it can indeed feel like it is nagging you.

How are you feeling now? Check in with your body, Write a journal note about how you’re feeling. It was so frustrating!

What I like about this app, however, is that it gives me complete control over when and how I receive notifications. After some trial and error tweaking the settings, I’ve struck a balance that’s good for me. Kudos to the app developers for thinking that through and giving the user the power to configure the app.

If it wasn’t customizable, if it just always reminded me when it wanted to, I probably would have stopped using it because any mindfulness benefits would have been counteracted by annoyance with the many reminders.

As users, we also must take responsibility for how we configure our technology and choose which technology to use. In addition, we must stay aware over time of whether the apps we’re using remain helpful. There might be some apps that are beneficial for six months, but then you find that you no longer need the app to remind you anymore.

Pay attention to how you actually feel when you’re using these apps. Pause and think: Is there something about this that I like and something I don’t like? If so, are there any settings here that I can change to make it work more like how I want it to?

I don’t know whether or not it occurs to people, but if there aren’t any settings to change, you can contact the app developer to request an improvement. Developers these days are just craving feedback from their users â€” it’s one of the things they spend the most time, money, and energy on. If they’re using something like a lean startup methodology, a key aspect of that is staying in touch with their users and keeping in mind what works and doesn’t work for them.

So contact the app developer and request more control over how you can configure their app.

Another thing: Contact developers when you like something too. Don’t wait until you have a problem and only tell them about the negatives. If there’s something that really works well for you, let them know. Or if you found a problem or bug that you want fixed, tell them something that also works really well that you don’t want to change. That’s really helpful for them and may actually make someone’s day.

In the end, it’s tough to strike a balance between the benefits of mindfulness reminders and the risks that they will actually frustrate you and impede your mindfulness.

But even if you are not a programmer or software developer, there is a way to take a more proactive stance to influence how the technology you use is developed for your own benefit and configure that technology so that it works in the best way for you.