Screen Time is Changing Young Brains, but Could it be Good?

Today children are exposed to screens of all sorts from an early age: TV screens, 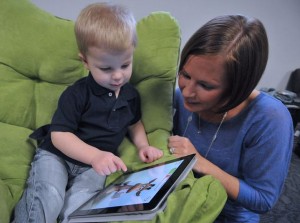 phone screens, tablet screens, etc. A huge change from the times when the most screen-time children got was watching Saturday morning cartoons. Today we have 24/7 cartoon channels, games on phones, tablets, computers, and even devices made specifically for children. As much as we’d love for our children to get outside and play as often as we did, or sit down with a pile of building blocks and create their own entertainment for hours-on-end, that just isn’t the reality of today any longer. So what does this shift to more screen time mean for young developing minds?

Surprisingly, there’s actually might be a little bit of good that could come from all of this added screen time that children are gettingâ€¦ although it’s definitely not all good!

In one study a group of young mice were shown a light display, similar to what children would see in a videogame, for six hours each day. The brains of each of these mice showed dramatic changes in multiple areas of the brain. According to Jan-Marino Ramirez, these changes show the brain being wired toward a more baseline excitement level. What does this mean? It means their brains need much more stimulation to attract attention.

So what’s the good news? This rewiring of the brain means an easier time staying calm in a stressful environment. Great, right?

But, the mice in this experiment also had some challengesâ€¦ They also showed signs of attention deficit disorder (ADD), with learning problems and were more likely to engage in dangerous behaviors.

Sometimes you’ve got to take the bad with the good. On one hand, playing video games from a young age could help children deal with this fast-paced world that we live in, but on the other it may desensitize the brain and make concentration more difficult. While there’s still much debate as to what these changes mean for developing minds, there are programs out there that are trying off-set these changes and help make learning easier for children by bringing mindfulness into the classroom.

Our digital world is changing more than just the minds of our children, it could be affecting our own as well, see how here.

And until we fully understand what so much screen-time means for the young brain, the best thing to do is not to take it away, but to limit it.