Responding, Not Reacting to Your Smartphone 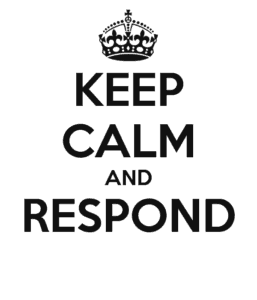 Have you ever watched a tennis sequence in which a player serves and the receiver runs in reaction to the serve and then hits the ball back off balance? Throughout the exchange, the server stands firm and is seemingly dictating where and when the receiver moves.

You’re woken up every day by an alarm on your phone, and from that moment on, you may feel like you’re frantically reacting to it. We’ve all been there and know the feeling.

You can see it in many if not all competitive sports: One side appears to be in control of the flow and doing what it wants, while the other side is just barely keeping up and trying to react. It’s prevalent in many human interactions as well. I see it frequently in negotiations, with one party taking  the lead and making the first strong offer while the other party just reacts.

When you’re on the receiving end and feel a lack of control, it’s obviously not enjoyable. It can almost feel like you’re a puppet for the other party, and even if you’re ultimately deciding  how you’re reacting to them, you’re still reacting in some way.

In terms of mindfulness, it’s certainly a situation in which you are not acting based on your own intention or self-direction.

There is hope, though. We don’t have to be this way â€” with our smartphone, in sports, or in negotiations. In all of these scenarios, there are strategies that have been developed for learning how not to react or how to break out of that cycle.

The first suggestion is a very general and personal one: If you feel like you’re often out of control, reacting to your smartphone, and your habits are mindless, apply some mindfulness. Ask yourself if there are particular situations in your life in which you regularly feel grounded, in control, able to set your intention and consistently act according to it, and are not reactive to technology or people.

We are all complicated beings. Sometimes, we can be very grounded, self-directed, and capable of taking the initiative in one context (e.g., at work) but not in another (e.g., with our family).

Think carefully about your life and I bet that you will find at least one context in which you do have skill, wisdom, and the ability to not be reactive. This is not something you’re going to figure out in one sitting, but asking yourself, What is it about me in that context that has enabled me to be non-reactive? would be beneficial.

The goal is to learn about yourself in one context and then try to see the parallels in another. In this case, can you try to apply those same kinds of habits or skills in connection with your use of technology?

1. You may find it easier to transfer over skills to the smartphone context from one in which you had to consciously practice and learn how to be grounded, focused, and not reactive.  If you are naturally a good negotiator but find it hard to negotiate with your family, it may be harder for you to transfer that natural talent because you may not be conscious of how or why you are effective. It might take more effort to understand the how and why. But if you can identify a skill that you had to consciously study and practice in order to improve, it may be easier for you to transfer that skill to the context of your family interactions.

2. Start practicing whatever you think may be useful from the one context in which you’ve been successful, happy, and self-directed. Then you can develop some ideas for how to apply that practice to your smartphone use. See if it works. Don’t expect it to work immediately or give up too quickly. Practice every day or throughout the day.

By following these pointers, you can identify and leverage the skills needed to wrestle control back from your phone.