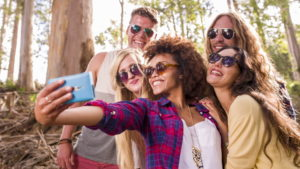 We all know that the image people portray of themselves on social media is highly selective and curated. People often post only the information that paints them in a positive light and makes them seem as interesting as possible. As a result, their social media lives don’t always reflect their full reality.


There’s also an emphasis on whatever is most eye-catching and can generate strong feelings. It can be through words or an image. Sometimes those things can be negative, like a literal or figurative train wreck.

For its part, real life is full of positive, negative, and neutral. It’s not always very strong in the emotional sense, either. Some of life is just…boring.

When I was studying computer science and engineering at MIT, MTV’s The Real World had just started. It was one of the first reality TV shows and predates the internet. Despite its title and coverage of real people, we knew this was a highly curated portrayal of people’s lives together in the house. The show was maybe an hour long , so the producers took the most exciting, interesting, and provocative segments to air.

The living situation was also clearly designed to create conflict, love interests, and all kinds of extreme interactions.

They would pick people who were very different from each other to maximize the likelihood of conflict between them. Moreover, they cast people who were camera-friendly. They tended to be photogenic, extroverted, loud, and generally conducive to entertaining viewing.

Although it’s called The Real World and there was a certain realistic element to it in the fact that it was unscripted, the show was ultimately designed to create an artificial situation that would attract the most viewers. The interactions that would be selected for inclusion in the show were highly edited for the highest impact.

I remember joking with a friend of mine that if they ever did an MIT edition of The Real World, it would be very boring: an hour of just watching one of us sit at a table with a textbook in front of us and our homework for the day. 45 minutes in, we would scream in frustration, write something down, and cross it out. It would be SO boring. That’s a fact. That is what life often is.

A major aspect of mindfulness practice is paying attention to what your current experience actually is without judging it. Just pay attention and see what is actually happening from moment to moment, whether it’s positive, negative, or neutral.

We don’t have to continue participating in social media in the way that most people do. I’d like to suggest a challenge called “realistic social media.”

Social media is always going to portray some subset of your life and you’re always going to make choices about what information you convey. However, you can provide a more representative sample of yourself that basically includes the positive, negative, and neutral.

Here’s how: Whenever you next feel like posting, pause, do a little mini meditation, and pay attention to your experience in that moment. It could be what you’re seeing, feeling, thinking, or hearing. Post about what you’re currently experiencing without filtering it â€” whether it’s positive, negative, or neutral.

This is an exercise in changing your social media posting behavior.

There will be things that are very personal, but I suspect that this will result in a change in how you portray yourself â€” and it will be interesting to see the response. Pay attention to how you feel about the feedback. This is called non-reactivity. You are going to post information about yourself in the way you want to do it regardless of how people react to it.

Try this out and suggest it to your friends. This could be so much more powerful if many people do it. It could provide social validation and change the culture of social media in the long term.

We all have the power to make choices about how we use Facebook, Twitter, and Snapchat. This is an example of the kind of change we can decide to make on our own. We don’t need them to change how we use their platforms. We have the power to do it and can exercise it right now.

If there’s something that doesn’t feel good or right to you about the unrealistic way that other people portray themselves, you can change it by how you portray yourself. This may create a more realistic, honest, and less judgemental representation of ourselves.