Make Plans as If the Internet Didn’t Exist 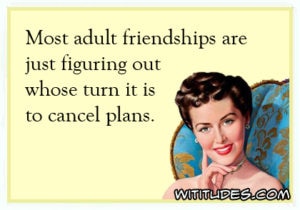 In recent years, many of us have taken to canceling  plans at the last minute via text or by using our smartphones in other ways. It usually happens minutes from the meeting time. I try not to do this, but I am definitely guilty of it.

Before the internet, this was something that was not done as often. People made a real effort not to cancel unless there was some sort of true emergency. If they did cancel at the last minute without a valid reason, it would reflect very poorly on them. That doesn’t seem to be true anymore. It seems to be socially acceptable now to cancel plans at the last minute â€” and to cancel them via text.

This can hurt your reputation and perceived willingness to commit to things in both a professional and personal capacity. I believe this issue comes from our ability to get in touch with someone at any moment, which seemingly removes the need to let someone know far in advance that we may be forced to cancel, reschedule, or arrive late.

I’m in my mid-40s and recently spoke to someone in her mid-20s. She explained that bailing out is so common among people her age that she actually stopped making important plans with friends.

Smartphones play a significant role in this phenomenon, as they now shape how we schedule events. The interesting part is that you can spend more time scheduling something through online messaging than at the actual meeting itself. It’s hard enough when it’s just one person. When more than two people are involved, it becomes a scheduling nightmare that can be extremely time-consuming, frustrating, and anxiety-producing.

Here’s a tip: Schedule meetings as if the internet didn’t exist.

Imagine you have scheduled to meet with someone at 1 p.m. If you act as if there is no internet and your morning schedule starts getting delayed, you’re probably going to need to call a couple of hours in advance to let them know. The purpose of this tip is to see how it affects your mindset and how the actions you take will lead you to be more mindful and present. Think about the other person and the consequences of your actions.

The internet gives us this sense of security that we can instantly reach people at any time, and this is what contributes to the last-minute rescheduling. Act as if the internet didn’t exist and see if that results in you doing fewer things at the last minute.

Does anything change if you reschedule the meeting a day before because you’re swamped with work? Would it be wiser to reschedule and avoid the risk of being unable to reach the person at the last minute? Do it a day in advance rather than a minute in advance.

It’s very common now for people to schedule meetings at the last minute.

You’re acting as if the internet doesn’t exist.

As with all mindfulness practice, take note of how you feel about your new behavior. Do you feel happier, less stressed, and less anxious?