Finding the Joy in Anticipation Beyond All the Communication 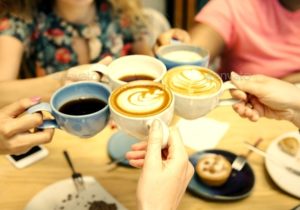 A while back, I heard someone say that technology has brought about the end of anticipation. Before the internet, when we went to visit a family member or friend who lived far away from us, we had a lot to talk about and catch up on since the last time saw each other.

But now that we are often in regular communication with people online â€” even indirectly via social media activity â€” that person can stay on top of our lives.

Therefore, when we get together face to face, we both already know what’s been happening with the other person. There isn’t necessarily anything wrong with that. However, if you remember a time when you did need to wait until you met with someone in person to catch up with them, don’t you recognize that there was something nice about having looked forward to getting together in order to find out what the other person was up to since you last saw them? This is what is meant by the internet having brought about the end of anticipation.

I think that in losing anticipation we have lost something valuable, particularly when the anticipation was in relation to someone we did not see frequently. The scarcity of our face-to-face interactions gave those moments a special quality.

If you feel similarly, see what you can do to recreate anticipation. Let’s say there’s a family member you’re going to be seeing a month from now and you don’t see them often. You can hold back on what’s going on with you and in return not seek information as often from them before you get together in person â€” but not in a forced or unnatural way.

A few weeks before a visit to see my parents, we might call each other to check in on the logistics of the trip. We might also talk about some things we are going to do, and if my parents start asking me about what’s been going on with my work and personal matters, I’ve taken to saying, “Let’s talk about that when we get together.” I’m framing my response in a way that feels natural and conducive to me delving into those topics when we get together. I would prefer to spend the time when we meet in person catching up. This also allows me to savor the anticipation in the days and weeks leading up to the trip.

That’s merely a personal example. You could come up with your own version of what I do. Simply make sure to let whomever you’re going to meet with know why you’re doing it so they don’t wonder what’s wrong or think there is some other motive behind it. In the weeks before I see my parents, I’ve found that there is a positive feeling around spending time together and catching up on what is going on in each other’s lives.

In the end, this is but one of the ways you can recreate anticipation. Find an approach that works for you and your relationships.